In the week of the Bonn climate talks, where the US has effectively ceded leadership to China, it is interesting to look at the divergence in approach emerging closer to home. At a meeting of the Westminster Energy, Environment and transport Forum on 10th October, a series of speakers discussed climate change and the priorities for the National Adaptation Programme in the UK.

The elephant in the room was an overemphasis on modeling potential impacts, at the expense of how the UK responds to climate, whether it is changing or not. As a fellow attendee commented, the UK seems to have a plan for more consultation.

This is in spite of the fact that the Committee on Climate Change Adaptation Sub Committee has found the ‘current policies and actions will not be sufficient to counter the risks identified.’ 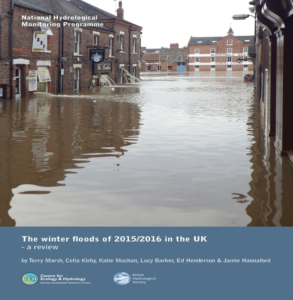 A scientific review of the winter floods of 2015/16 confirms that the event was one of the most extreme and severe hydrological events of the last century.

The gap between measuring and managing is even more noticeable when compared to what is happening in Scotland, where climate change adaptation is driven by the Scotland Climate Change Act 2009. The Act gives public bodies climate change duties with mandatory reporting in Scotland, putting the emphasis firmly on the requirement to respond to climate change impacts, rather than report them.

The work on adaptation sits within the Scottish government’s decision to move to wide scale system wide measures, such as removing diesel and petrol engines by 2032. Addressing climate change in Scotland has three key strands: risks, impacts and actions. There are 100 indicators to achieve this with multiple strands of work, including the national coastal change assessment, Scottish Water, Historic Environment Scotland, all NHS Boards and Adaptation Scotland. Adaptation Scotland is working on place based collaborations, especially in cities, including Aberdeen, Edinburgh, Glasgow and the Clyde. The second Scottish Adaptation Programme is moving to balance a risk-based approach with the need for more alignment with strategic outcomes

I left the seminar struck by the gap emerging between the ‘UK’ approach (note: we did not hear from Wales or Northern Ireland) and the more deliberate and energetic approach in Scotland, characterized broadly in the table below:

We are not telling the story of the need to adapt to the climate clearly in England yet. Although the Royal Society ran a storylines workshop and the CCC have published some story telling films and animations last year, contrast this with Adaptation Scotland which is already doing this nationally.

The meeting’s two chairs, Lord Whitty & Baroness Brown, did a great job of highlighting this emerging divergence, summing up with some key questions and observations: 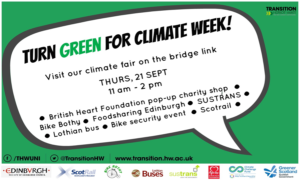 “Taking place from 18 to 22 September, Climate Week 2017 is a Scottish Government campaign to raise awareness of, and inspire action on, climate change. The campaign aims to highlights the importance of reducing emissions and to encourage people to adapt to a changing climate. To celebrate the campaign, Transition is hosting a Climate fair on the bridge link. We will be joined by several organisations who will showcase their climate-friendly projects, in the hope to inspire you to join our fight to be greener. There will be a pop-up charity shop by British Heart Foundation, a crash course in CPR, food waste advice, walking route advice and bike workshops”

Catherine has been working across government/ business/academia for 30 years. She is a Director at Agulhas: Applied Knowledge, providing advice on international development and sustainability. She leads not-for-profit programme LivingtheDream.uk.com, developing an aspirational story of sustainable living, collaborating with the Centre for Understanding Sustainable Prosperity, University of Surrey as a Visiting Fellow. She was on the Stern Review core team in 2006, leading on adaptation in developing countries. She contributed to the latest Climate Change Risk Assessment for the UK.